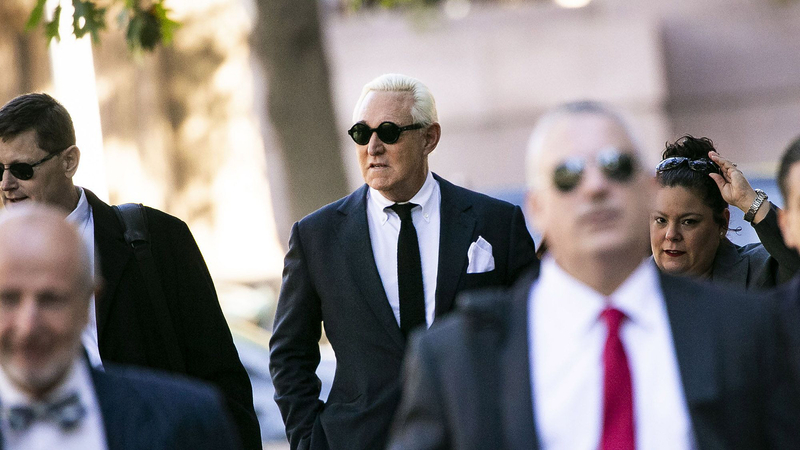 Roger Stone, former adviser to Donald Trump’s presidential campaign, arrives at federal court in Washington on Nov. 4, 2019. MUST CREDIT: Bloomberg photo by Al Drago
By Syndication Washington Post, Bloomberg · Erik Larson
Roger Stone deserves to spend as long as nine years in prison for crimes that include lying to Congress to protect President Donald Trump, U.S. prosecutors told a judge, in what could be the longest sentence ever imposed as a result of the Mueller investigation.

Trump hinted that he might eventually pardon Stone or commute his sentence, tweeting out overnight: “Cannot allow this miscarriage of justice!”

Stone, 67, a longtime Republican operative, argues that he’s already been punished by his public trial and loss of professional standing. His age, health and status as a first-time offender convicted of a non-violent crime don’t warrant a prison sentence, he said in a court filing Monday. He asked for probation.

If the government’s argument is accepted by the judge, Stone’s sentence would be the longest of those sent to prison as a result of special counsel Robert Mueller’s probe of Russian interference in the 2016 elections. Former Trump campaign chairman Paul Manafort is serving 7 1/2 years for bank fraud and other crimes, and Michael Cohen, the president’s onetime personal lawyer, is doing three years.

Stone, who was convicted in November, is due to be sentenced by U.S. District Judge Amy Berman Jackson in Washington on Feb. 20. The government and defense lawyers offered recommendations for Stone’s sentence in court filings late Monday, with starkly different versions of his crimes.

“Roger Stone obstructed Congress’s investigation into Russian interference in the 2016 election, lied under oath and tampered with a witness,” the U.S. said in its filing. “And when his crimes were revealed by the indictment in this case, he displayed contempt for this court and the rule of law.”

But Stone’s lawyers pushed for a lighter sentence.

“The nature and circumstances of the offense, Stone’s history and characteristics, including his low likelihood of recidivism and significant health concerns, all favor a sentence that provides punishment without incarceration,” Stone’s lawyer, Bruce Rogow, said in the letter.

The U.S. case against Stone – the last person charged in Mueller’s 22-month probe – included evidence that Trump knew about WikiLeaks’ plans to release emails damaging to his rival, Hillary Clinton. Stone lied to Congress to protect the president, prosecutors said.

Trump, who has long defended Stone’s actions and criticized the case against him, weighed in with an early morning tweet Tuesday, saying his former associate is facing a “horrible and very unfair situation.”

The government said in its memorandum that Stone’s sentence should be enhanced because after he was indicted he posted an image of the judge overseeing the case with crosshairs next to her head and violated a court order by repeatedly posting about the case on social media.

Prosecutors also argued for a tougher sentence should be enhanced because Stone used threats of violence to keep a possible intermediary with WikiLeaks – comedian and talk show host Randy Credico – silent about the scheme, telling Credico in writing to “Prepare to die,” prosecutors said. It doesn’t matter whether Stone had a “serious plan” to harm him, the U.S. said.

Stone rejected the claim, saying in court filings that Credico made it clear he didn’t consider anything Stone said a threat. Credico also filed a letter on Stone’s behalf, asking for mercy in the sentencing.

“Stone’s indecorous conversations with Randy Credico were many things, but here, in the circumstances of this nearly 20-year relationship between eccentric men, where crude language was the norm” weren’t threats of physical harm, his lawyers wrote.

“Roger Stone has been in political trenches for decades, on the scene at many American events,” Caputo said. “I just cannot fathom how incarcerating him at his age, taking him away from his family, will serve the interests of justice.”

One comment on “Stone seeks to avoid prison; Trump hints at pardon #ศาสตร์เกษตรดินปุ๋ย”