A child and her mother look at a diorama of Tokyo at night made with Lego toy bricks at the Lego Land Discovery Center Tokyo on June 14, 2012. MUST CREDIT: Bloomberg photo by Tomohiro Ohsumi.
By Syndication Washington Post, Bloomberg · Marika Katanuma
At first glance, things seem to be getting better for Japanese women. In an economy that’s historically lagged other developed nations when it comes to female workforce participation, a record 71% are now employed, an 11 point leap over a decade ago.

The Japanese government boasts one of the most generous parental leave laws in the world and recently created a “limited full-time worker” category aimed primarily at mothers looking to balance job and family. And one of the most important needs for working families-child daycare-is slowly being expanded. 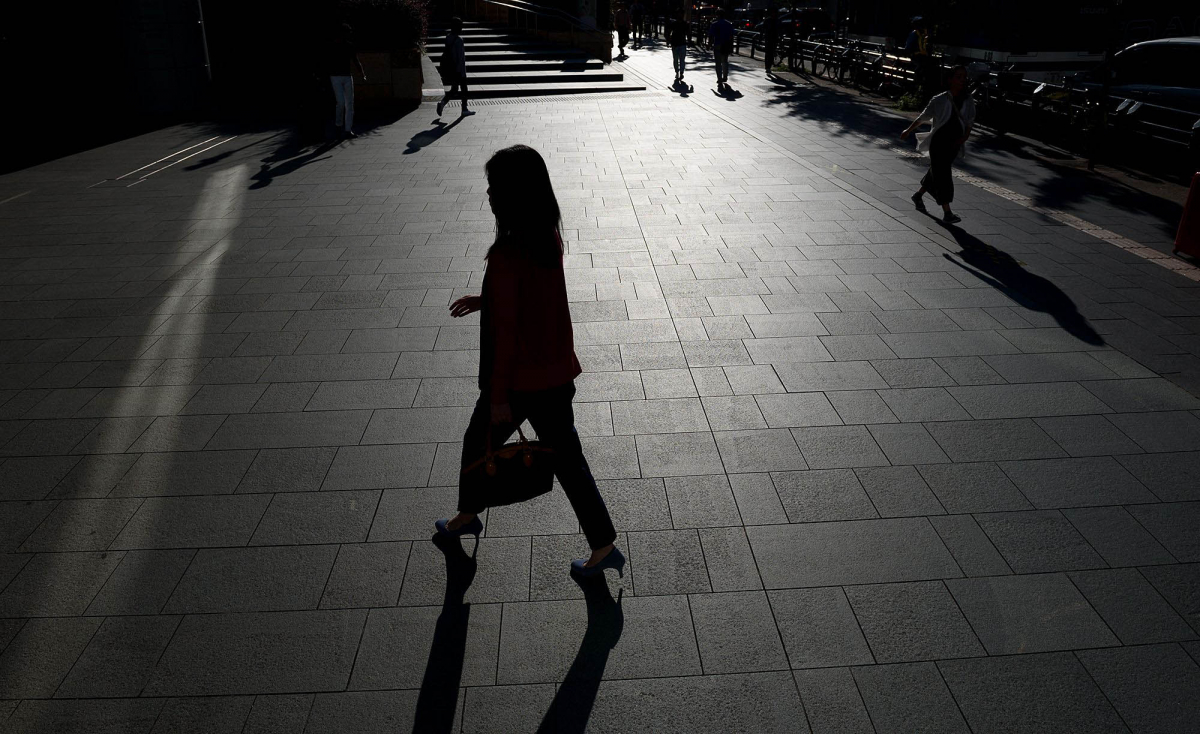 A woman walks near the Roppongi Hills complex in Tokyo on Sept. 29, 2017. MUST CREDIT: Bloomberg photo by Akio Kon,

But even with these advantages, Japanese women-whether single or married, full-time or part-time-face a difficult financial future. A confluence of factors that include an aging population, falling birth rates and anachronistic gender dynamics are conspiring to damage their prospects for a comfortable retirement. According to Seiichi Inagaki, a professor at the International University of Health and Welfare, the poverty rate for older Japanese women will more than double over the next 40 years, to 25%.

For single, elderly women, he estimated, the poverty rate could reach 50%.

In Japan, people live longer than almost anywhere else and birth rates are at their lowest since records began. As a result, the nation’s working-age population is projected to have declined by 40% come 2055.

With entitlement costs skyrocketing, the government has responded by scaling back benefits while proposing to raise the retirement age. Some Japanese responded by moving money out of low-interest bank accounts and into 401(k)-style retirement plans, hoping investment gains might soften the blow. But such a strategy requires savings, and women in Japan are less likely to have any.

Japan’s gender pay gap is one of the widest among advanced economies. According to the Organisation for Economic Cooperation and Development, Japanese women make only 73% as much as men. Japan’s demographic crisis is making matters worse: Retired couples who are living longer need an additional $185,000 to survive projected shortfalls in the public pension system, according to a recent government report.

A separate study did the math for Japanese women: They will run out of money 20 years before they die.

Dire pension calculations published by Japan’s Financial Services Agency in June 2019 caused such an outcry that the government quickly rejected the paper, saying it needlessly worried people. But economic observers said the report was dead-on: Japan’s pension system is ranked 31st out of 37 nations due in part to underfunding, according to the Melbourne Mercer Global Pension Index.

Takashi Oshio, a professor at the Institute of Economic Research at Hitotsubashi University in Tokyo, said private pensions and market-based retirement investments are now much more important than they once were. Machiko Osawa, a professor at Japan Women’s University, was more blunt: The days of being “totally dependent on a public pension” are over.

But there are additional obstacles for Japanese women. Although 3.5 million of them have entered the workforce since Prime Minister Shinzo Abe took office in 2012, two-thirds are working only part-time.

Japanese men generally see their compensation rise until they reach 60. For women, average compensation stays largely the same from their late 20s to their 60s, a fact attributable to pauses in employment tied to having children or part-time, rather than full-time, work. Since the mid-2000s, part-time employment rates have fallen for women in more than half the countries that make up the OECD. But in Japan, the trend is reversed, with part-time work among women rising over the past 15 years.

One of Abe’s stated goals is to encourage more women to keep working after giving birth, part of his so-called Womenomics initiative. But according to a recent government study, almost 40% of women who had full-time jobs when they became pregnant subsequently switched to part-time work or left the workforce.

Machiko Nakajima’s employment trajectory is typical of this state of affairs. Nakajima, who used to work full time at a tourism company, left her position at age 31 when she became pregnant.

“I had no desire to work while taking care of my kid,” she said in an interview. Instead, Nakajima spent a decade raising two children before returning to work. Now 46, the mother of two works as a part-time receptionist at a Tokyo tennis center. Though her husband, who also is 46, has a full time job, Nakajima said she fears for her future, given the faltering pension system.

“It makes me wonder how I’m going to live the rest of my” life, she said.

According to government data, the monthly cost of living for a Japanese household with more than two people is 287,315 yen ($2,650). Some 15.7% of Japanese households live below the poverty line, which is about $937 per month.

More than 40% of part-time working women earn 1 million yen ($9,100) or less a year, according to Japan’s Internal Affairs and Communications Ministry. The lack of benefits, job security and opportunity for advancement-hallmarks of full-time employment in Japan-make such women financially vulnerable, particularly if they don’t have a partner to share expenses with.

Yanfei Zhou, a researcher at the Japan Institute for Labor Policy & Training and author of a book on the subject, “Japan’s Married Stay-at-Home Mothers in Poverty,” contends there’s a gap of 200 million yen ($1.82 million) in lifetime income between women who work full-time and women who switch from full-time to part-time at the age of 40.

“It’s not easy to save for retirement as a part-time worker,” she said. Single mothers need to make at least 3 million yen annually, or about $27,600-numbers you can’t hit “if you work part-time.”

In Japan, public pensions account for 61% of income among elderly households. The system provides basic benefits to all citizens and is funded by workers from age 20 to age 59-and by government subsidies. Many retirees get additional income from company pension plans.

While widows can claim some portion of a deceased spouse’s pension, the number of unmarried Japanese is steadily rising, having more than tripled since 1980. The latest survey showed the rate for women is 14% versus 23% for men.

One “reason why women’s retirement savings is lower than men’s is that the lifetime salary is low,” said Yoshiko Nakamura, a financial planner and president of Alpha and Associates Inc. “Traditionally, many women chose to limit their workload in order to take advantage of social security spousal benefits, and that created many ‘women’s jobs’ that pay less than 1 million yen.”

Japan has historically created incentives for married women to limit their employment to such non-career track jobs; lower pay means they (and their husbands) can take advantage of spousal deduction benefits. For example, the government gives a 380,000 yen ($3,133) tax deduction to a male worker if his wife earns less than about 1.5 million yen ($13,700) per year.

The private sector does it, too. Many companies give employees a spousal allowance as long as their partner earns less than a certain amount. Some 84% of private companies in Japan offer workers about 17,282 yen per month ($159) as long as their spouse earns less than a certain amount annually-usually 1.5 million yen, though the ceiling is lower for most companies.

Yumiko Fujino, who works as an administrative assistant, should have been happy when the government raised the minimum wage. But she wasn’t: In order for her husband to keep receiving spousal benefits, she had to cut back on her hours.

These limits are known among married women in Japan as the “wall.” Unless a wife is making enough money on a part-time basis to afford income taxes and forgo spousal benefits, it doesn’t make sense to work additional hours. But to work those kind of hours means less time for kids, which is usually the point of working part-time in the first place.

Women who qualify for the spousal benefit, Fujino said, “think less about retirement security and more about the current cost of living.”

Abe’s government is considering changes that would require more part-time workers to contribute to the pension program and mandate that smaller companies participate as well. Takero Doi, professor of economics at Keio University, said the expansion would be a small step toward giving women a financial incentive to work more.

Yoko Kamikawa, a former gender equality minister, agreed that the current pension system-last updated in the 1980s-should be expanded to include part-time workers. Forty years ago, single-income households made up the overwhelming majority in Japan. Since then, Kamikawa said families have become more diverse.

Machiko Osawa, a professor at Japan Women’s University, went farther, saying social security should be based around individuals, not households. “Marriage doesn’t last forever,” she said. “Women used to rely on their husbands for financial support, but now there’s the danger of unemployment, and more men are in jobs where their pay doesn’t rise.”

However, one of the biggest reforms proposed by Abe, “limited full-time worker” status, doesn’t always work as advertised. “Limited full-time” employees often face the same workload they would if they were full-time. Junko Murata, 43, a mother of two, said juggling both work and taking care of her children proved too difficult, so she eventually returned to a part-time job with spousal benefits.

While an increasing number of companies have been giving women the opportunity to work more flexible hours after they return from maternity leave, some women complain of being marginalized, with few opportunities for career growth and advancement.

A government survey released last year offered a bleak outlook. It showed no improvement in gender equality in the workplace, with some 28.4% of women saying they are treated equally at work, up only 0.2 percentage points since 2016.

Yasuko Kato, 42, returned to work as limited full-time accountant three years ago, but said there’s been little change in her responsibilities.

Because she drops off and picks up her kids, she works from 9 a.m. to 4:30 p.m. “I have no extra time at work,” she said. But because of a chronic staff shortage, she doesn’t get any help from full-time employees. As a result, Kato said “it’s difficult to raise my hand for a new role.”