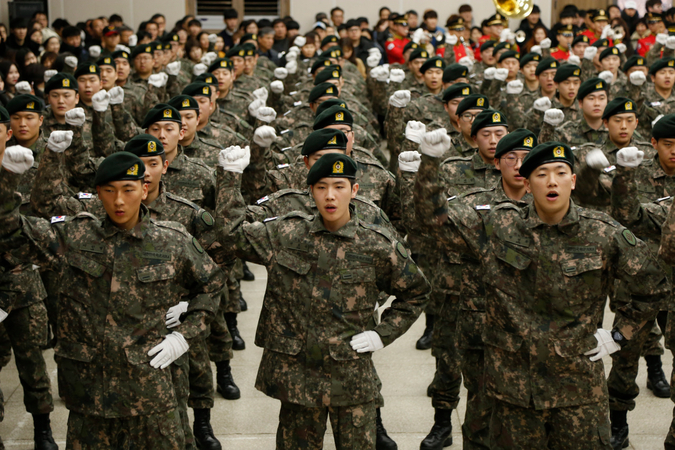 Soldiers sing a marching song at an army basic training graduation in the southwestern city of Gwangju, South Korea. (Yonhap)
By The Korea Herald/ANN
All able-bodied men in South Korea must serve in the military for about two years. A reminder that the 1950-53 Korean War ended in a cease-fire, not a peace treaty, the constitutional duty has rarely invited questions about whether soldiers are duly compensated for their service.

That now shows signs of change.

Both the public and the government are increasingly aware of soldiers’ right to due monetary compensation, shifting away from considering military service as a statutory civic duty without adequate financial return, experts say.

“There’s the growing public understanding that we can no longer urge soldiers to serve active duty out of their allegiance or commitment to the country,” said Kim Yong-hyun, a professor of North Korean studies at Dongguk University.

Besides, the intense debate regarding the legal minimum wage here has had an impact, he said.

“We’ve recently had and continue to see a heated debate about setting the minimum wage, and while doing that, I think, we’ve come across the military sector as well — whether conscripted soldiers are paid right doing what they do.”

The wage for drafted soldiers recorded a 33 percent on-year jump in 2020 and is expected to rise further in 2022, when it will reach half of the monthly minimum wage workers received on average in 2017.

Starting this year, sergeants will receive an increased monthly stipend of 540,900 won ($466). Corporals and privates will receive slightly less. The hike marks a 33 percent on-year jump.

That is about 40 percent of the country’s minimum monthly wage in 2017.

Soldiers’ pay hikes were one of reasons behind the record high defense budget.

While most Koreans support the wage hike for conscripted soldiers in the long run, they remain divided over how fast to bring about that change and how far it should go.

Young people who have recently been discharged demand better treatment of conscripts.

“We’re talking about ‘fair compensation’ for the service soldiers deliver for about two years. I don’t think half of minimum wage is enough. In fact, I think we could raise it more,” Choi Keun-seok, a 25-year-old Seoul resident, said.

“Soldiers who spend their time in the military should at least get half of what they would have otherwise earned if they worked as civilians,” said Nam Young-woo, a senior at Chungbuk National University.

“An increasing number of people are championing for ‘fair compensation’ to be offered to soldiers,” he said.