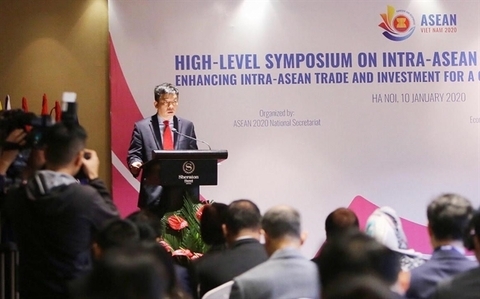 Vu Ho, director general of the ASEAN Department under the Vietnamese Ministry of Foreign Affairs, speaks at the symposium. — VNA/VNS Photo
By Viet Nam News
Enhancing intra-ASEAN trade and investment is important for a cohesive and responsive ASEAN.

This was stated by Vu Ho, director general of the ASEAN Department under the Vietnamese Ministry of Foreign Affairs, at a high-level symposium on intra-ASEAN trade and investment in Ha Noi on Friday.

The director general also said that unprecedented transformation in the global economy and technological advances had brought great potential for peace and sustainable development, as well as economic integration.

However, countries were also facing great challenges regarding competition and anti-globalisation movements, he pointed out.

Therefore, the key question for the ten-member group was how to maintain its strength and cohesiveness, as well as handle the impact of strategic competition, Ho said, stressing that ASEAN’s potential for a stronger intra-bloc economy and investment had yet to be fully tapped.

Over more than five decades of establishment and development, ASEAN had witnessed many economic achievements, but it was clear that the potential for promoting the intra-bloc economy and investment was still great, Ho noted.

At the 34th and 35th ASEAN Summits, ASEAN leaders reaffirmed their commitment to intra-ASEAN investment.

ASEAN countries also set a goal in 2017 to double intra-bloc capital flows by 2025 and better prepare for the fourth industrial revolution.

Ho said the enhancement of the regional economy and investment would help with the realisation of ASEAN’s priorities in the future.

He noted that there remained many barriers to intra-bloc investment, including those regarding institutions, policies and logistics, which needed to be addressed, adding that the symposium was expected to gather ideas and recommendations from experts and policymakers to promote regional economic integration.

Vietnamese Deputy Minister of Industry and Trade Tran Quoc Khanh said ASEAN had made strides in integration since the establishment of the ASEAN Free Trade Area, with intra-bloc trade climbing from US$89 billion to $200 billion last year.

Trade between Viet Nam and the bloc also increased from $4 billion to $18 billion during the period.

With a population of 600 million, ASEAN has become the world’s sixth largest economy and a typical example of economic integration, with its economic growth rate higher than the global average and pace expected to continue in the coming years.

The official suggested ASEAN strengthen its unity and maintain its cohesiveness to overcome challenges in the context of rising protectionism.

Businesses hoped for transparency in intra-ASEAN investment, he said, calling on regional countries to work together to identify and remove barriers facing investors.

ASEAN was one of the most dynamic regions in the world and the fifth largest economy with gross domestic product (GDP) reaching about US$3 trillion in 2018, said Aladdin D. Rillo, Deputy Secretary-General for ASEAN Economic Community, ASEAN Secretariat.

ASEAN was also the fourth largest economy in the world in terms of trade of goods with a total value of more than US$700 billion.

Regarding foreign investment (FDI), FDI growth in ASEAN was about 4.4 per cent, much higher than other developing economies, making ASEAN the third largest FDI receiving economy in the world.

However, intra-bloc trade currently accounted for only 23 per cent of the bloc’s trade, which was relatively low compared to other regions, he said.

Intensity of intra-bloc trade had also decreased significantly in recent years, he added.

Agreeing with Aladdin D. Rillo, former Deputy Foreign Minister Pham Quang Vinh also said that the process of economic integration would bring many benefits to ASEAN member countries and the community in the context of increasing trade tensions and protectionism.

In order for ASEAN to achieve its goal of doubling intra-bloc trade by 2025, Rillo said that intra-ASEAN trade needed to achieve an average annual growth rate of 9.1 per cent.

He also said that ASEAN countries needed to strengthen co-operation in trade and services and reform institutions as these were also the major components in promoting the ASEAN Economic Community. — VNS