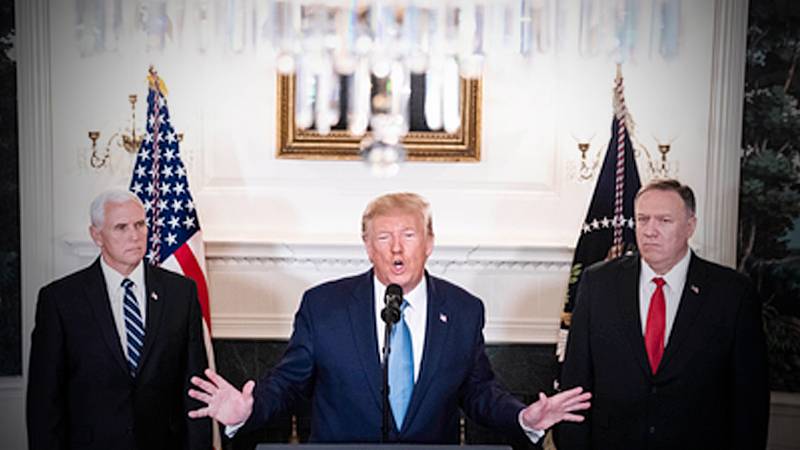 Flanked by seven Democratic colleagues from the Senate and House in the Capitol, Sanders, I-Vt., compared the current crisis to the circumstances leading up to two of the most controversial conflicts in United States history.

“Just as we were led into Vietnam and Iraq by lies, the Trump administration is misleading us on Iran,” said Sanders. He said the administration has produced “no evidence . . . not even in a classified setting ” to back up its claim that Iranian commander Maj. Gen. Qasem Soleimani had been plotting an imminent attack against Americans. A U.S. strike killed him last week.

The tensions in the Middle East have altered the course of the Democratic primary less than a month before the first nominating contest, sharpening the conflict between Sanders and former vice president Joe Biden. The candidates’ frequent comments on the U.S.-Iran standoff in recent days mark an abrupt turn from months of focus on domestic issues.

Sanders’s highlighting of his opposition to the Vietnam and Iraq wars is a way to emphasize his lifelong antiwar credentials, an implicit contrast with Biden, who initially supported the Iraq War. Biden delivered his own comments on Iran this week, labeling Trump’s behavior as reckless.

Thursday’s news conference was a rare appearance for Sanders away from the early Democratic nominating states, where polls show he is among the leading candidates. He was joined by Sen. Kirsten Gillibrand, D-N.Y., a former candidate for president who ended her bid last year.

Sanders was also flanked by Rep. Ro Khanna, D-Calif., a national co-chair of his campaign who has teamed up with Sanders to introduce companion legislation in the House.

Sen. Elizabeth Warren, D-Mass., another 2020 candidate, is a co-sponsor of the Sanders bill, but she did not appear with him Thursday. The for former South Bend, Indiana, mayor Pete Buttigieg, a Democrat, did not immediately respond to questions about whether it supports Sanders’s bill.

Biden has presented himself as an experienced hand with a long résumé of dealing with sensitive security matters from his days in the Obama administration and as chairman of the Senate Foreign Relations Committee.

The former vice president delivered a speech in New York on Tuesday, warning against U.S. military engagement, slamming Trump as “dangerously incompetent” for his handling of the crisis with Iran and saying his “impulsive decision” to order the killing of a top military official from that country put the United States at risk of greater international conflict.

Beyond his comments about war, Sanders has been one of the most vocal critics of Soleimani’s killing in particular. He has frequently called the U.S. strike an “assassination” and accused Trump of bringing the United States to the brink of another destructive fight. Biden has adopted a more nuanced stance.