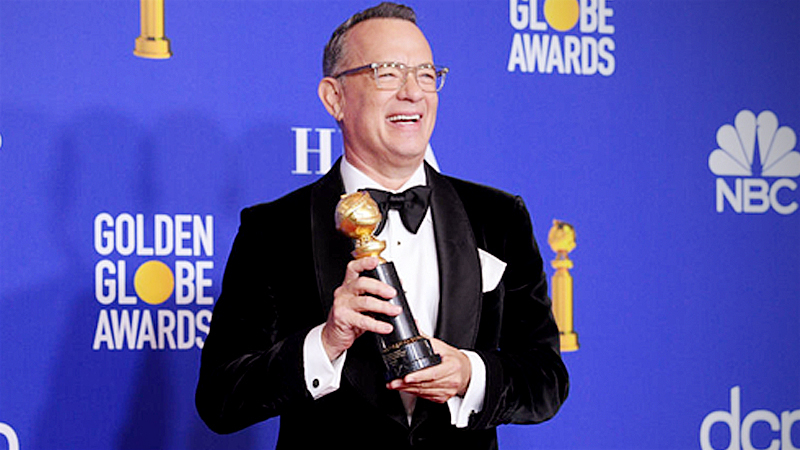 77th Annual Golden Globe Awards – Press Room BEVERLY HILLS, CALIFORNIA – JANUARY 05: Tom Hanks poses in the press room during the 77th Annual Golden Globe Awards at The Beverly Hilton Hotel on January 05, 2020 in Beverly Hills, California. (Photo by Daniele Venturelli/WireImage)
By The Washington Post · Travis M. Andrews · ENTERTAINMENT, CELEBRITY, FILM, TV
The Hollywood Foreign Press Association awarded Tom Hanks the prestigious Cecil B. DeMille Award at the Golden Globes on Sunday, given each year to someone who has made “outstanding contributions to the world of entertainment.” But both his speech and his introduction by Charlize Theron framed him as far more than someone who merely contributes to pop culture.

“The most undeniable thing that can be said about Tom Hanks is both deceptively simple and yet overwhelmingly true,” the actress said. “He just makes the world a better place.”

Theron introduced Hanks by first telling a story from her childhood: “When I was 8 years old, growing up on a farm in South Africa, my three most prized possession were my ballet shoes, my pet goat and my VHS copy of ‘Splash.’ ” She said she watched the movie so many times that the ribbon broke, which she fixed with a piece of Scotch tape.

Years later, she found herself auditioning for “That Thing You Do!,” the 1996 film Hanks directed.

“After my first read, I thought I completely blew it . . . and I had somehow forgotten to breathe . . . Tom just kindly looked at me, took a beat, and said, ‘I’m so sorry, Charlize. Do you mind just giving me five minutes? I have to step out. I’ll be right back and we’ll do that scene again,’ ” she recalled. But “Tom didn’t need five minutes. I needed five minutes.”

A jubilant Hanks, who hugged Theron as he took the stage, said “most of the people in this room, I would pay to see them get their cars washed” before joking about “Love Boat” being included in his highlight reel.

His voice sounded hoarse, which he quickly addressed by saying, “I have a cold the size of Merv Griffin’s ‘Jeopardy!’ royalties, so forgive me. I’ve been drinking an awful lot of savagely orange drinks for the past 24 hours, and I’m a little jittery.”

He grew serious as he thanked his family and began choking up.

“A man is blessed with a family sitting down in front like that,” he said, gesturing to his children and spouse, Rita Wilson. “A wife who is fantastic in every way, who has taught me what love is. Five kids who are braver and stronger and wiser than their old man is. And a loving group of people who have put up with me being away for months and months and months at a time. I can’t tell you how much your love means to me.”

The rest of his speech was slightly less focused, as he discussed the people with whom he’s worked and those he admired before offering a bit of advice.

“You’re a dope if you don’t steal from everybody you’ve ever worked with, and I have stolen from the likes of the people who only need one name, like Meryl, like Denzel, like Antonio, like Meg, like Julia,” he said. “I have never not been challenged or flummoxed or lost sleep because of the work that was asked of me by the directors I’ve worked with, every single one of them, the screenwriters I’ve worked with, every single one of them.” He then shouted out the likes of Nora Ephron, Steven Spielberg, Clint Eastwood and Ron Howard – among others.

Hanks was sure to note that actors, directors and screenwriters aren’t the only people involved with creating films.

“Movies are made shot by shot. . . . Everyone has to do their job to perfection, have to hit a mark and have to go there,” he said, pointing out that sometimes the movie’s success rests on the shoulders of the makeup artist or the focus puller and, yes, the actor. “And it’s those moments as an actor where everyone I have ever worked with helped me get to that place. ”

He also offered advice to the crowd that had given him a standing ovation as he took the stage. “Showing up on time is one of the greatest liberating acts you can give yourself in a movie,” Hanks said. “That means those people with radios in the ears don’t need to knock on your door and say, ‘They’re ready for you.’ You’re actually already ready, and you have the liberty and you have the freedom of being there early enough to settle down, because when the time comes you have to hit the marks and you have to go there.”

As he reflected on his career, he began choking up again. “It’s the cold that is making this happen,” he said through tears. “I swear to God I’m not this emotional at home. Thank you, HFPA. Thank you all here. Thank you all for your inspiration and all of your work and all of the struggle that you guys all go through in order to hit the marks and tell the truth.”