Stretching and bending on the mat, one female prisoner says it is the only time she feels free and no in pain.

Prison life in by its definition limiting and yes, painful, too as the minutes tick by slowly with little to occupy the mind or body. For the fortunate few, there are a number of volunteers doing projects in prisons including art activities, knitting, making furniture, making Buddha statues, all activities that could lead to income-earning work once they are released. There’s yoga too though that appears to be less-accepted on the outside

The Prison Yoga Project is being run by Thirawan Watthanothai, former dean of the Faculty of Architecture, Rajamangala University of Technology Thanyaburi (RMUTT) and introduced in 2011 at Ratchaburi Central Prison before expanding to other prisons. She also plans to initiate a yoga practice project for men in prisons.

After more than 8 years of running her yoga programme in prisons, Thirawan is determined to continue and expand, noting that it has been shown to be useful to the inmates.

“Ninety per cent of the inmates who come to practise yoga have their own unique abilities and what we need to do is encourage society to accept them once they are released. Most yoga studios refuse to give them work even if they pass the test. I want society to give people an opportunity. There was a case of a female inmate in Udon Thani, whose foreign boyfriend helped her move to Switzerland an even opened a yoga studio for her. She was proud that she learned yoga at the prison, “said Thirawan who started to learn yoga with an Indian instructor after overworking, feeling stressed and unable to sleep.

The idea to launch yoga in prison came about after she helped a fellow teacher prepare a report on life in prison and discovered the levels of stress from which female inmates suffer. She felt yoga could be the answer and set off on a journey to get her idea accepted. It took a while but Thirawan was determined.

“We ask the officers to select young people serving long sentences for yoga practice. If we want to mould them into yoga teachers, they must study from 9am to 2pm every day for several months. We saw how it improved not just their state of mind but also helped with lowering blood sugar. After three weeks, the body adapts and the students want to continue. We selected 25 people to teach yoga, most of them with 20 years to run on their jail terms. Prison administrators and staff cooperate to organize morning yoga classes for female inmates. ”

India, America, England, Australia and Scandinavia have also expressed interest in using yoga as part of their jail rehabilitation programmes and studies have shown that prisoners who have been practising yoga enjoy positive physical and mental or even spiritual health. Research in US prisons has found that yoga helps with concentration, makes the body and mind relax and reduces stress and anxiety. 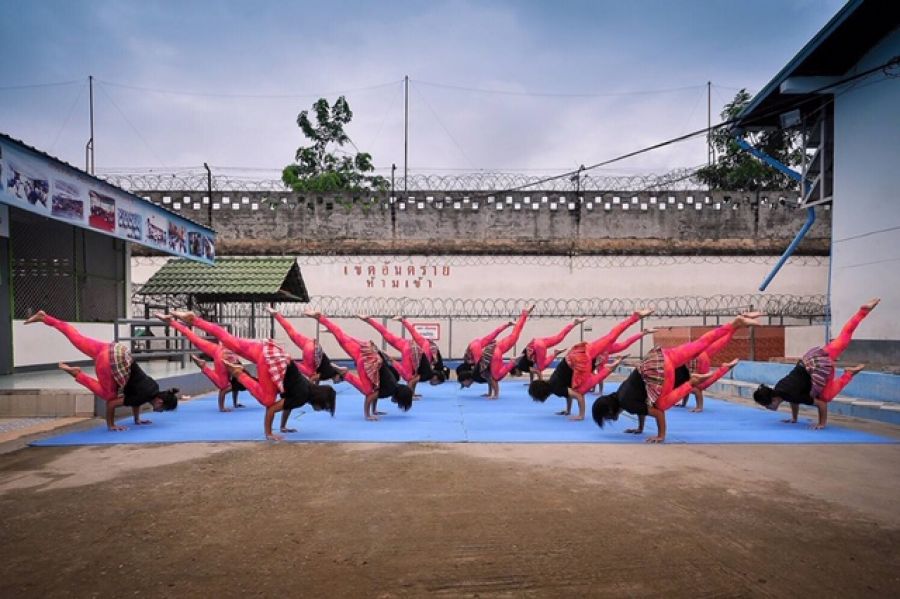 Patcharee Mungmai, 30, a former inmate was given the opportunity to teach yoga to other inmates. She said that yoga is very helpful to her because while she was in prison, she almost lost her mind.

“In prison, the scariest thing is not being beaten but the possibility of going insane. Yoga really made us more conscious. I was sentenced to 16 years and 8 months, but only served 8 years and 1 day. I was arrested during my 4th year in university as part of a drug round up,” she says. Today she is a speaker on drug prevention at the probation office in Ubon Ratchathani Province.

One comment on “Yoga in prison: another life choice for inmates”