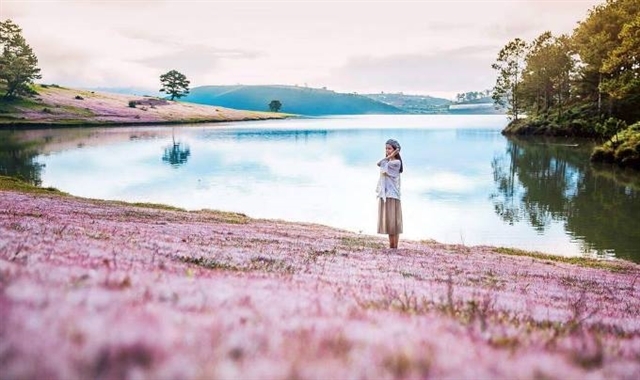 Pink grass hills in Lam Dong Province have attracted many tourists who come to take photos when the grass is in full blossom. — Photo du-lich-da-lat.com
By Viet Nam News

Lam Dong —The pink grass in the area surrounding Dankia-Suoi Vang Lake in Lac Duong District, Da Lat City in the central province of Lam Dong is in full blossom at the end of November, marking the beginning of a festival in the province.

Celebrated from November 16-30, the Langbiang Pink Grass Festival 2019 will feature a variety of exciting activities like horse racing without saddles – a traditional sport of the K’Ho ethnic people, photo contests, gong performance and traditional games of the local ethnic minorities.

Particularly, this is the first time that the traditional wedding ceremonies of K’Ho ethnic people in the area will be revived via the notes and memories of the village patriarchs and artisans from Dung K’Si Village, Da Chais Commune.

According to Cil Poh, the vice chairman of Lac Duong Commune’s People’s Committee, K’Ho people follow matriarchy, meaning that K’Ho woman will “catch” her own husband and the men must live with their wives’ family.

The traditional wedding ceremonies of K’Ho people will take place in Dung K’Si, an ancient village located by the foot of Bidoup – Nui Ba, the highest mountain in the south of the Central Highlands.

According the organisation board, Langbiang Pink Grass Festival 2019 is a typical cultural activity oriented towards the 8th Da Lat Flower Festival that will be held in Da Lat City at the end of this year.

It is also aimed to enhance the attractiveness of pink grass hills in Lac Duong Commune among tourists and promote the upcoming launch of the construction of the Dan Kia – Suoi Vang National Tourism Site by 2030.

Pink grass is a wild plant. It is common in forest areas, especially those with pine trees. When the plant is in full blossom in early winter, it carpets the whole area with tiny flowers which bloom into a collection of soft pink snowflakes.

The stunning view of a natural wonderland in Vietnam makes it a magnet to many photographers and tourists to Lang Biang Mountain in Lam Dong Province to capture such special moments of the year. — VNS