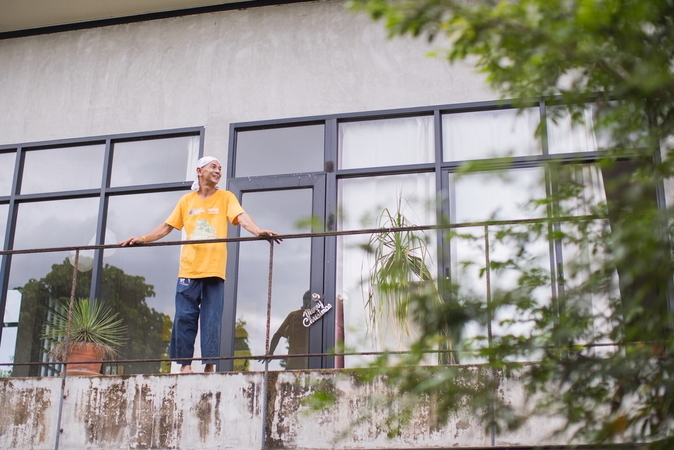 Academic and former industrial designer Torvong Puipanthavong has taken up a new career as an agriculturist, turning his home into a sufficiency economy learning centre.
By Kitchana Lersakvanitchakul
Special to The Nation

Former industrial designer and lecturer Torvong Puipanthavong ditches the rat race to devote his time to the self-sufficiency philosophy. 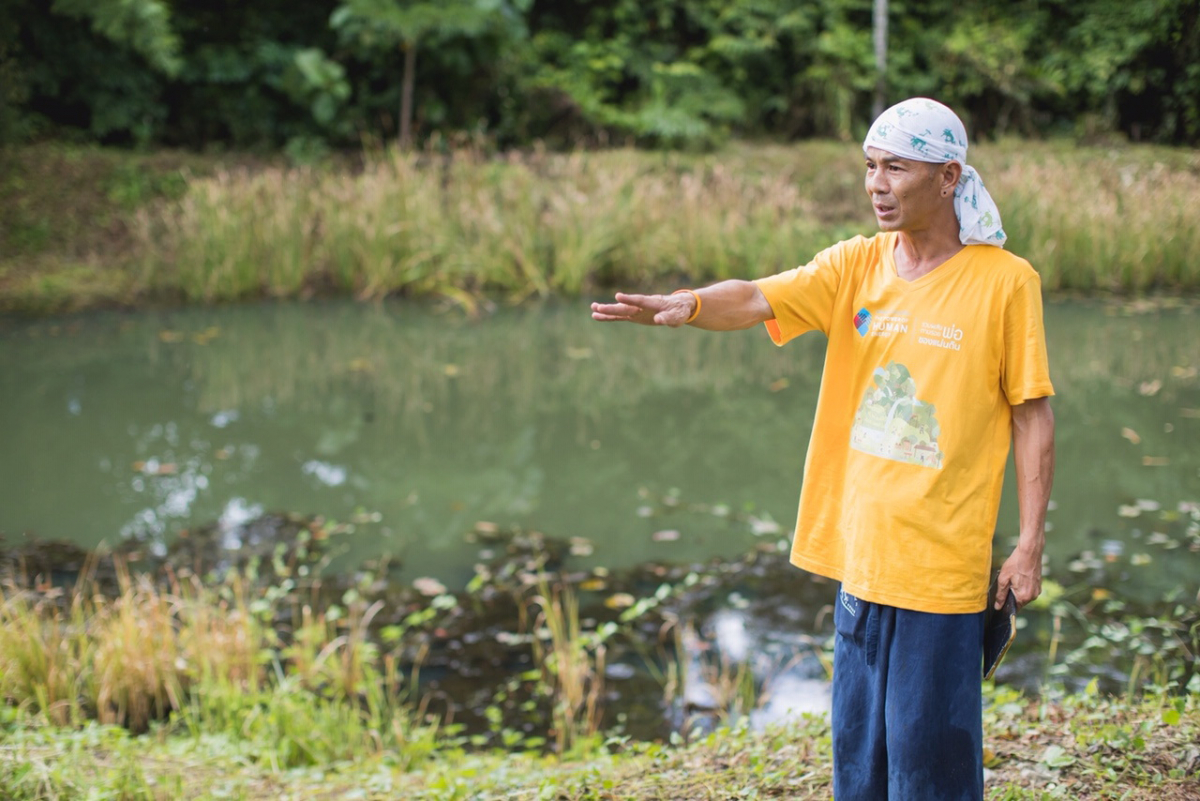 Torvong has developed his land according the philosophy of His Majesty the late King Rama IX.

The sufficiency economy philosophy, introduced in 1974 by His Majesty the late King Bhumibol Adulyadej the Great, is an approach to sustainable development that espouses moderation, reasonableness and prudence as a development framework based on knowledge and virtue. 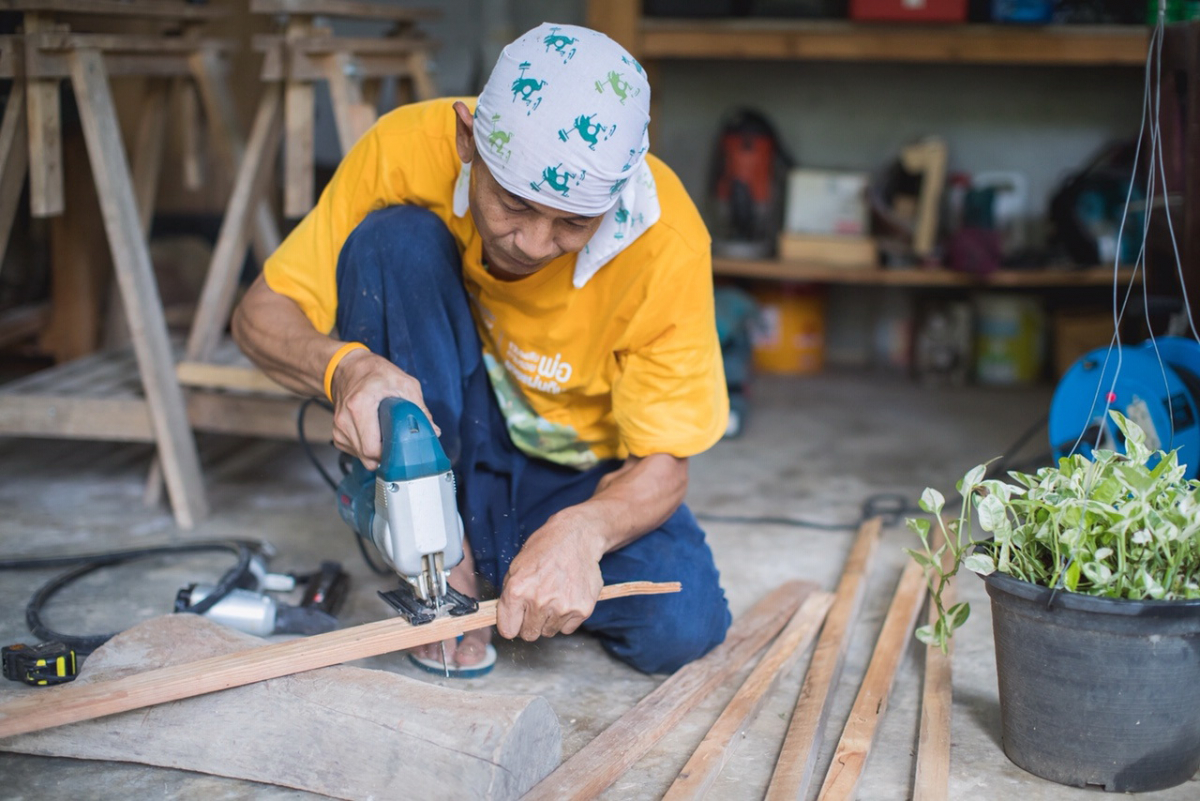 Over the years, it has been adopted by many Thais, one of whom, Torvong Puipanthavong, the former head of the Industrial Design Department and vice-dean of the Faculty of Architecture, King Mongkut’s Institute of Technology Ladkrabang (KMITL) decided to make it his life’s work in 2015 and has never looked back.

“I was 46 when I retired and my friends and colleagues all thought I was mad to be giving up a steady income of almost Bt100,000 a month,” he says with a happy smile, adding that he is enjoying life on his Bt9,300 pension. “Once, I was a part of making furniture design become the most popular subject of the Faculty of Architecture and the most selected by students. As a result, the faculty earned Bt20 million.”

Torvong in his vegetable patch

The son of a civil servant, Torvong, who is now 50, was raised in different parts of the country before the family settled down in Phetchaburi Province. As a teenager, he was sent to Amnuay Silpa School and his talent for art and architecture landed him a place in the industrial product design course of KMITL.

Torvong points to the canal that winds through his land.

“As a student, I learned how to design everything from a toothpick to large items. When I graduated in 1993, I was approached by a major organisation but instead chose to work for a new company so I could learn from scratch. And learn I did – administration, marketing, psychology, and economics – as well as producing artistically beautiful designs that satisfied customers because they were also functional. All I thought of at that time was getting the maximum benefit,” recalls Torvong.

After working at the new company for a while, Torvong decided to further his studies. Short of cash, he opted to work as a lecturer at KMITL for four years and earned a scholarship for a master’s degree in industrial design at Central Saint Martins, the world-renowned arts and design college in London.

Coming home in 2001, Torvong was made head of the Industrial Design Department at his alma mater where he passed on his knowledge to students. Six years later, wanting more free time, he became a part-time lecturer and spent his leisure hours building a loft-style home suited to the Thai climate on a 3-rai plot belonging to his wife’s grandmother Lim in Phetchaburi’s remote Nong Ya Plong district.

Weekends, he would drive home and put on his farmer’s hat.

The 3-rai plot has been developed in line with the sufficiency philosophy.

“At first, I planned to retire at 50 and spend my life surrounded by nature. One day, Asst Prof Pichet Sowittayasakun, the vice dean of the Faculty of Architecture, told me how he based on his work on the King’s philosophy and introduced me to Dr Wiwat Salyakamthorn, or Ajarn Yak as he is better commonly known, a faculty adviser who had been following the sufficiency philosophy on his own land for almost 20 years. After having a conversation with Ajarn Yak, I decided to do the same.”

After two years of learning the King’s philosophy from Wiwat, who is the president of the World Soil Association, an adviser to Agri-Nature Foundation, and a former Deputy Agriculture and Cooperatives Minister, Torvong was all set to go. “I created a mind map with everything I had learnt about the King’s philosophy with regard to natural agriculture, soil, water, forest, people and dharma.”

That’s not to say he has totally given up on design. These days he uses his talent in art and science to create a life that’s in total harmony with nature. He has set up the Phetchaburi River Basin Agrinatural Community (PAC) and turned his Ban-Rai-Yai-Lim home into a sufficiency economy learning centre.

“I still lecture but these days my subject is the sufficiency philosophy and I work out of this learning centre. That too was a suggestion of Ajarn Yak, who helped me develop my land according to the King’s ‘3 Forests, 4 Benefits’ philosophy. I believe that people today yearn for a simple and natural way of life,” he says.

Torvong participated in “The Power of Human Energy: A Journey Inspired by the King”, a project led by Chevron Thailand Exploration & Production in cooperation with Research and Development Institute of Sufficiency Economy Philosophy, the Agri-Nature Foundation, and KMITL which motivates people to acknowledge the importance of the recovery and development of the Pa Sak River basin in line with the King’s philosophy and local wisdom to sustainably solve the problems of floods and drought. Torvong is one of the driving forces in the Phetchaburi River Basin.

“I really believe that the King’s philosophy is vital to the sustainable survival of the Thai people.” – Torvong Puipanthavong, former head of KMITL’s Industrial Design Department

“This project is very important to expand results of the King’s philosophy and serves as a guideline and an inspiration for everyone. The most important thing is the power of humans in helping each other to push it forward quickly. I believe in the power of unity,” says Torvong.

Torvong also respects the late King Rama IX’s teaching: “Our loss is our gain” meaning “our deficit constitutes our profit, or we incur a loss to reap a profit.”