The scenery at Izumi Park Town, the Tapio Shopping Centre (left) and The Sendai Royal Park where is next to the Sendai Izumi Premium outlets.
By Parinyaporn Pajee
The Nation

In this second part of the two-part series, the writer travels to Sendai in Northeast Japan to see how nature is being interwoven with urban development.

Leaving behind the forests and parks nestled in and around Tokyo’s business district, we head to Izumi Park Town – a 10 kilometres away from Sendai.

The Izumi Park Town is the sustainable residential area in Migayi Prefecture on which Mitsubishi started work some 50 years ago. The development was launched in 1969 when Mitsubishi snapped up some 10.74 square kilometres (6,712.5 rai) of forest land on the mountainside. The first stage of Izumi Park Town started in 1974 and Mitsubishi has been developing the area ever since, adding an industrial area and recreation zone to the housing areas.

Built from scratch, Izumi Park is now regarded as an ideal town with infrastructure and urban planning systematically designed to enhance people’s interactions and connections. The management of the town is carried out under mutual community rules while the development programme is designed to encompass almost every aspect of urban living ranging from living space to schools, industrial and business districts, as well as recreational areas and even hospitals, all designed to accommodate people of any age and gender. The most recent developments include the new shopping mall Izumi Park Town Tapio and Sendai Izumi Premium outlets.

This peaceful coexistence takes place under a set of rules developed to enable the town to operate with the benefits and interests of the community in mind while showing respect for each other. Community members are made aware of their role and responsibility to respect the rules, allowing this quality society to maintain its high living standards.

With a current population of approximately 25,000, the town has been systematically developed and is rich in green spaces. Houses are beautifully designed, surrounded by trees, public parks and golf courses as well as such facilities as shopping malls, supermarkets and outlets that accommodate the ever-increasing number of tourists. Visitors are mesmerized by the impeccably organised urban spaces, appropriately divided into four different zones from living, urbanisation, recreation and working.

Intersections are replaced by T-sections to avoid traffic incidents.

In the Living area, the emphasis is placed on the design of roadways to enable the most effective functionality, which includes different types of roads with carefully calculated geometric designs that have minimal curves and take account of the disruption caused by private driveways. Intersections are replaced by T-sections to avoid traffic incidents and here, as elsewhere, priority is given to the inhabitants’ safety and well-being.

In addition, each residential project is required to have at least 30 per cent green space of the total spatial programme and provide a communal area to encourage public activities and interactions between community members.

A site visit of AP (Thailand) team including four students from AP’s Open House and the press at Izumi Park Town.

The design also takes care to ensure no sensibilities are offended by ensuring that the roofs are in cool tones and there are no fences, In the meantime, the town encourages the use of the community bus provided by Mitsubishi Estate that offers residents comprehensive services at a cheaper cost. Responsibility for the public and private space is shared between the Sendai City, the landowner, MEC (Mitsubishi Estate Group) and the Plant Committee to make sure every tree in the town gets the care it needs to thrive.

The highly urbanized town centre is home to the schools, public activities and shopping malls and surrounded by the recreation and activity areas that include the golf course, tennis courts and horse tracks.

The working zone is home to the business area, with the light industry and office zones systematically managed and properly separated from the heavy industry zone. 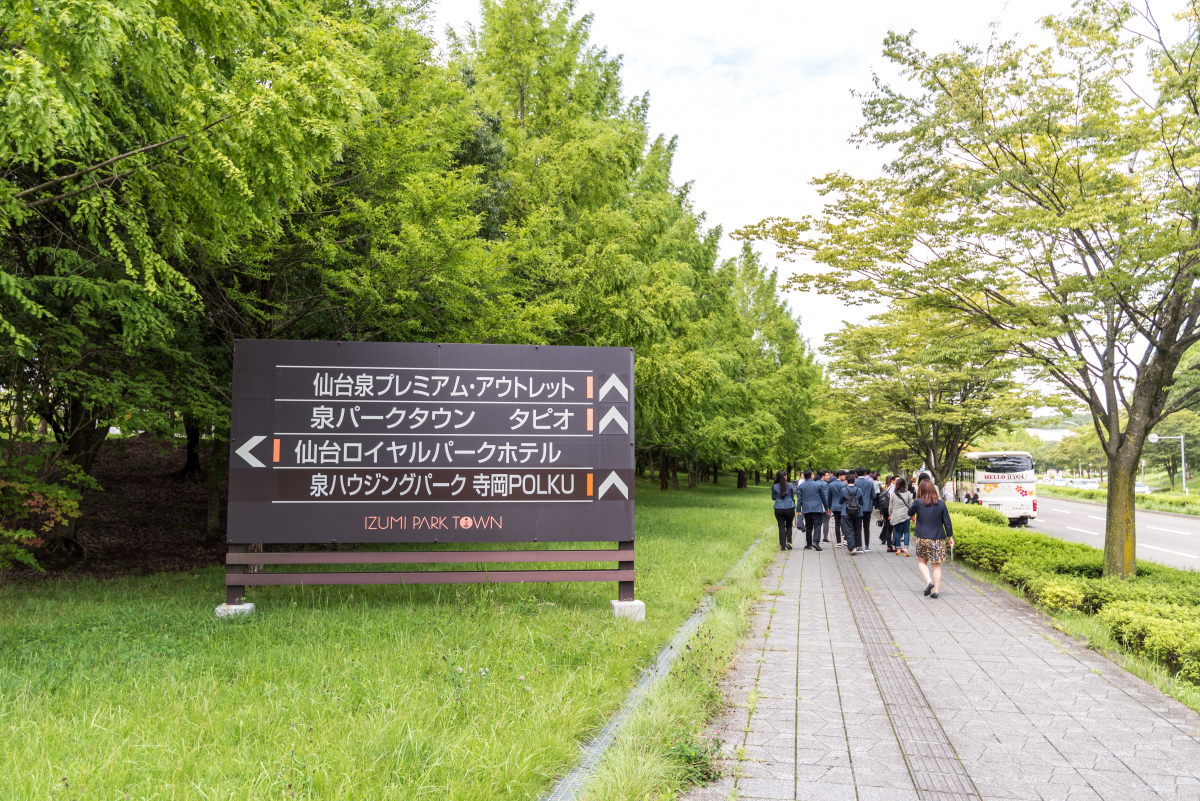 The housing area is designed to situate behind the trees area that help to reduce the noise from vehicles.

Vittakarn Chandavimol, chief of AP (Thailand) ’s Corporate Strategy and Creation, is well pleased with the visits to Tokyo and Sendai, telling us that they inspire AP to adapt what they see in Japan into their upcoming projects.

“There are obviously a lot of differences between our two countries so there are things we just can’t do, like creating the concept of Izumi Park Town in Thailand. But there are also many things we can try, such as adopting the green environment design in housing projects both vertically (condominium) and horizontally (housing estate), the traffic design and also how to raise the community awareness,” he says.

“And we cannot adopt the same business model as Mitsubishi Estate has used for Izumi Park Town. Here Mitsubishi has developed phase after phase over a 50-year period and continues to do so. We, on the other hand, work from project to project.

“We don’t have a huge plot of land like Izumi Park Town, but what we can apply is how to develop different projects simultaneously in the same area serving different target groups and then try to turn these into a community,” he continues. 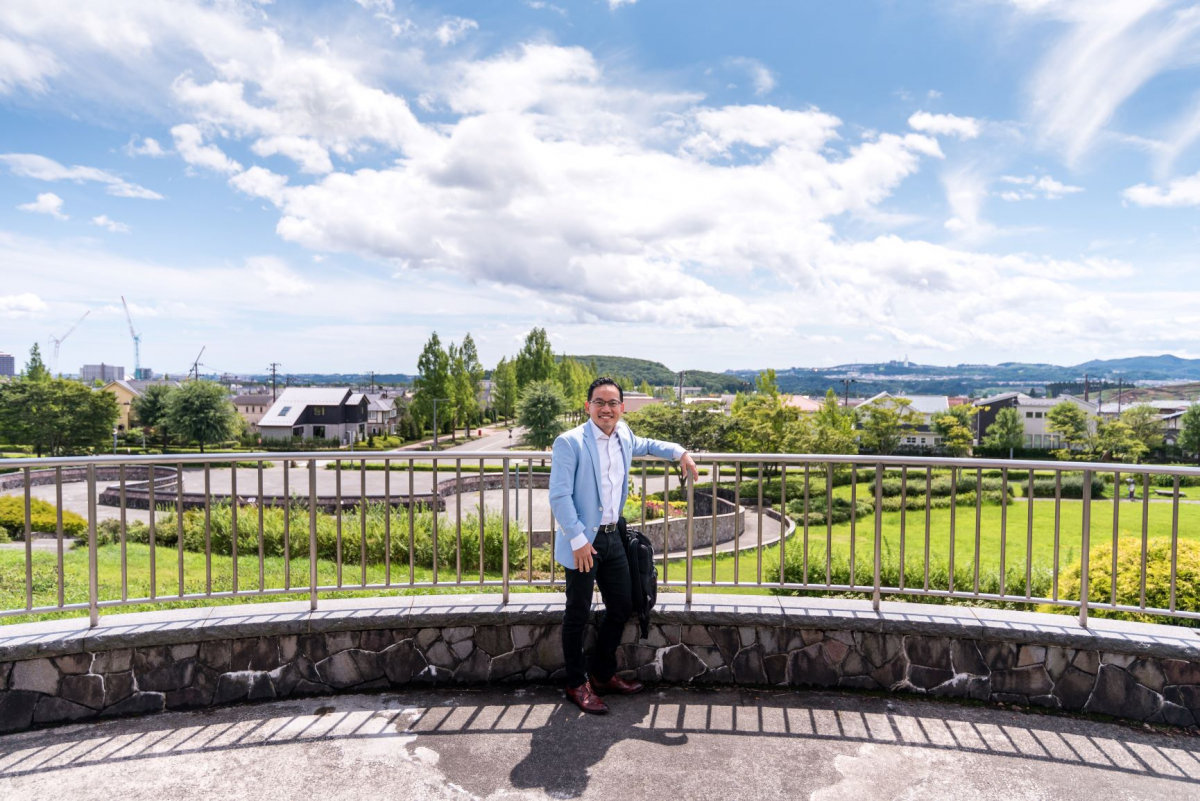 Vittakarn is also certain that the field trip is equally as beneficial to his students and the press.

“We bring our product development team to Japan too. While we can’t pick up and do in Thailand what we have observed from the field trips we’ve organised over the past few years, we carry the concepts inside our heads. When the Japanese start doing something, they do it

thoroughly and deeply. It can takes years to be successful and so forus it’s like a shortcut to learning.”

In the meantime, AP is also focusing on greening the environment. It is now working with the Big Trees Project in removing and relocating the big trees before clearing and construction begins whereas before it would simply have cut them down. The Big Trees Project’s arborist

and tree surgeon gives the guidelines on how to trim, cut or remove the tree properly. It is even sharing these ideas with its clients, bringing the project’s experts to teach people how to plant trees and take care of them.

See also thethe first of a two-part series on Mitsubishi Estate’s projects in Japan at  https://www.nationthailand.com/lifestyle/30376024